30 Assembly constituencies in one of the most backward regions of the State are going to the polls on March 27.

Thirty Assembly seats across five districts of south and western parts of West Bengal will go to polls on March 27, beginning the staggered eight-phase Assembly elections in the State. The campaign bells for the high-pitched polls for the first phase fell silent on Thursday evening.

Except a few seats of Purba Medinipur district, most of the seats that go to the polls in Pashchim Medinipur, Jhargram, Purulia and Bankura fall in the State’s Junglemahal region that was once a hotbed of Left-Wing Extremism. 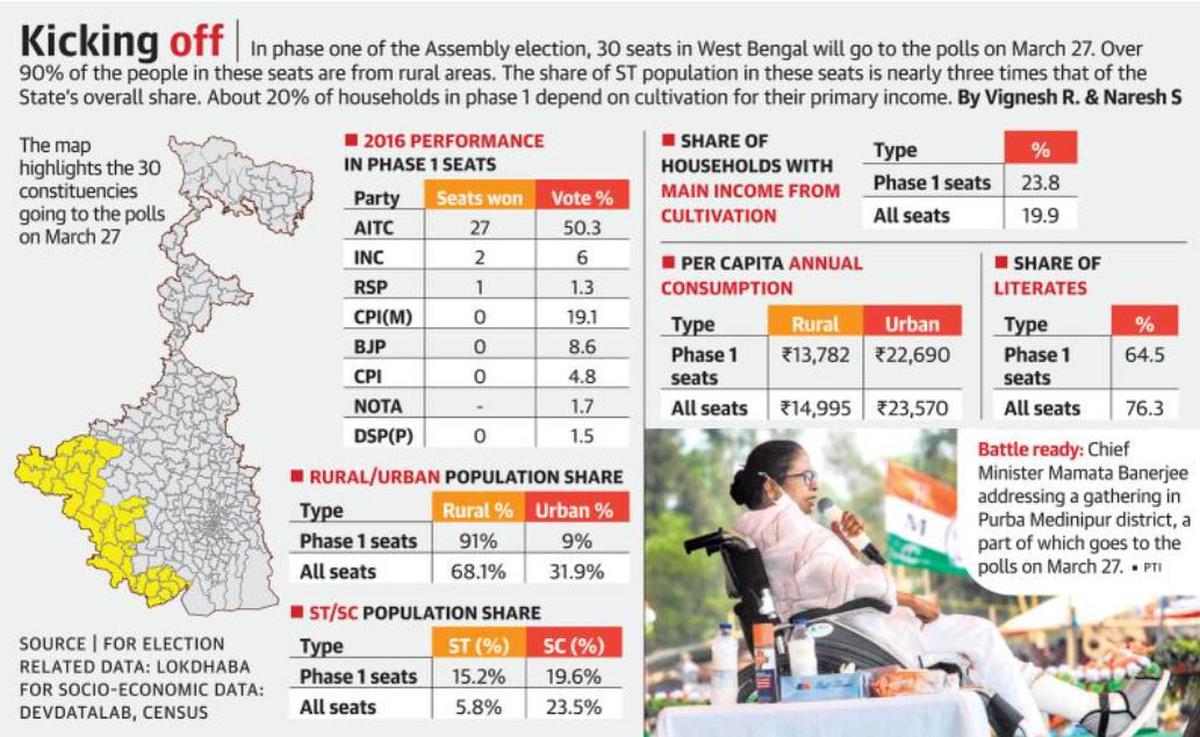 The nomination of a TMC nominee from Joypur was cancelled and the party has decided to support an independent from the seat. The BJP has supported AJSU (All Jharkhand Students Union) candidate from the Baghmundi seat in Purulia district. Senior Congress MLA Nepal Mahato is contesting from Baghmundi seat while Trinamool Congress leader Shantiram Mahato is trying his luck from Balarampur.

The other key constituencies are Kharagpur and Medinpur. From Medinipur, the Trinamool Congress has fielded actor June Malia. From Jhargram, the TMC has nominated Santhali language film actor Birbaha Hansda who will contest against the BJP’s Sukumar Satpati and CPI(M’s) young leader Madhuja Sen Roy.

Salboni will see former Left Front Minister and CPI(M) leader Sushanta Ghosh and in the adjoining constituency of Garbeta the Samyukta Morcha has fielded Tapan Ghosh. Both the leaders had considerable influence during the Left Front regime.

While the Prime Minister has held four rallies in each of the districts of Purulia, Paschim Medinipur and Purba Medinipur, and Bankura, Home Minister Amit Shah and BJP president J.P. Nadda have followed it up with a number of road shows and public meetings.

The Junglemahal region had voted overwhelming for the BJP in 2019 Lok Sabha polls and the party won Jhragram, Purulia, Bankura and Medinipur seats. The defection of Suvendu Adhikari from the TMC to the BJP has given it an advantage not only in Purba Mednipur but also in other districts of south Bengal. The TMC has put its faith in Chhatradhar Mahato, former leader of the People’s Committee Against Police Atrocities, a frontal organisation of banned CPI (Maoist), to revive its fortunes in the region.

The Trinamool has highlighted the absence of elected public representatives of the BJP from the region and introduced outreach programmes like ‘Duare Sarkar’ at the last moment. The State’s ruling party is emphasising on the restoration of peace and normalcy in the region as its achievement and is promising rations at the doorsteps under the public distribution outreach. Along with stress on development, Ms. Banerjee has in her meetings put more emphasis on popularisation of Al Chiki language and giving recognition to Sarna religion (a tribal religion).

Along with tribal issues, the other crucial one are unemployment, lack of industry and economic backwardness. The BJP is also highlighting the water crisis in the arid region which is going to polls. Both the Prime Minister and Home Minister have raised the issue of water crisis and that the piped water supply project in Purulia is pending for several years. The other promise of the BJP involves the allocation of the ₹18,000 of PM Kisan entitlement that has been pending for three years.

Even as the region had voted in favour of the BJP in 2019 Lok Sabha polls, political observers feel that Trinamool Congress with the support of tribal schemes like the ‘Joy Johar Bandhu Prakalpa’ (a pension scheme for tribals), establishment of the Bagdi Community Development Board, alongside streamlining the party organisation, is expected to fare better this time.

By digitizing over 50 lakh businesses in 6 months, myBillBook fuels the growth of SMBs in India

Indulge in a Wholesome Bowlsome treat at The Grid

New rules of the commission due to corona, bicycle-bike-car rally cannot be held in election campaign

All Mamata’s meetings have been canceled, the Chief Minister will hold a virtual meeting due to Corona