A three-cornered battle for 31 Assembly seats went to polls on Tuesday for the third phase of Bengal elections, with the BJP seeking to breach TMC fortresses, and Left Front-ISF-Congress alliance hoping to make a mark in areas, where identity politics has gained ground.

More than 78.5 lakh voters were eligible to exercise their franchise and decide the fate of 205 candidates — prominent among them being BJP leader Swapan Dasgupta, TMC minister Ashima Patra and CPI(M) leader Kanti Ganguly — in three districts — Howrah, Hooghly and South 24 Parganas.

Tight security arrangements were made to ensure peaceful voting, with 618 companies of CAPF deployed to guard 10,871 polling stations, all of which have been marked “sensitive” by the Election Commission. State police forces were also deputed at strategic locations to aid the CAPF.

Here are the live updates:

Mamata asking Muslims to vote for her, reflects minority votes slipping away: Modi

The prime minister said a similar appeal to Hindus by his party would have drawn the media’s and Election Commission’s wrath.

Asserting that Ms. Banerjee has problems with people sporting a ‘Tilak’ and wearing saffron, Mr. Modi said the TMC supremo’s appeal to the Muslims reflects that her “minority votes are slipping out of her hands.” Claiming that a BJP wave was blowing across West Bengal and his party would form the next government, Mr. Modi said Ms. Banerjee’s angry reactions indicate that she has lost the polls. – PTI

Clashes were reported from several parts of Bengal, where polling is underway in the third phase of assembly elections, with TMC candidates Sujata Mondal and Nirmal Majhi alleging that they were heckled and assaulted by BJP workers, a charge denied by the saffron camp in Arambagh.

Ms. Mondal, who is contesting the elections from Arambagh, said saffron party men chased her and hit her on the head, when she was out visiting polling booths in Arandi area of the constituency, after having received reports that “voters were not being allowed to exercise their franchise”.

“My bodyguards saved my life… I came to know that BJP members were thwarting people from casting their votes in Arandi. I went there to find out what went wrong. I was assaulted, hit with bamboo sticks by saffron party men,” Mondal, estranged wife of BJP MP Saumitra Khan, said. – PTI

West Bengal Chief Minister Mamata Banerjee on Tuesday claimed BJP activists were forcibly occupying polling booths and attacking TMC members, including party candidates, and asserted that she would not get bogged down by such “intimidatory tactics”.

Addressing a public meeting in Kalchini in Alipurduar district, the TMC supremo said her party’s nominee in Arambagh, Sujata Mondal, was chased and hit on head near a polling booth by saffron party workers.

“They have inflicted serious injury on our Scheduled Caste candidate Sujata, when she visited a booth. They also hit another candidate in Khanakul. In Canning East, security forces prevented our nominee Shaukat Mollah from entering a booth. There had been numerous such instances of attack on our candidates, party workers across the state,” Ms. Banerjee said. – PTI

Sporadic incidents of violence were reported on Tuesday in some areas where voting is underway in the third phase of the West Bengal assembly elections.

“The blatant misuse of Central forces continues unabated. Despite us repeatedly raising this issue, @ECISVEEP continues to be a mute spectator while men in uniform are being misused at several places to openly intimidate TMC voters & influence many to vote in favour of one party,” she tweeted.

She shared a screengrab of a scuffle between BJP and TMC supporters in Goghat constituency.

TMC turncoat and BJP candidate from Diamond Harbour seat, Dipak Haldar alleged that his former party is not allowing voters to come to polling stations.

“TMC men are not allowing BJP supporters to come out and vote freely, and unfortunately, the central forces are mute spectators,” he said. The ruling party in the state has dubbed the allegations as “baseless”.

In Dhanekhali seat, state minister Asima Patra accused the central forces of high-handedness and alleged that voters were being stopped from coming to the polling stations by the BJP “goons”, an allegation dismissed by the saffron party.

In Khanakul, TMC candidate Najmul Karim was allegedly assaulted by the BJP activists and slogans were raised against him. Later, central forces rescued him from the area.

In Arambagh, Sujata Mondal Khan accused the BJP of threatening the TMC supporters, an allegation denied by the saffron party.

A BJP supporter’s family member was allegedly killed in Hooghly district, hours before the commencement of polling in the area, police said.

Madhabi Adak succumbed to her injuries sustained while protecting her son from a few men who barged into their house, they said.

Adak’s family accused that the TMC was behind the incident, a charge denied by the ruling party. 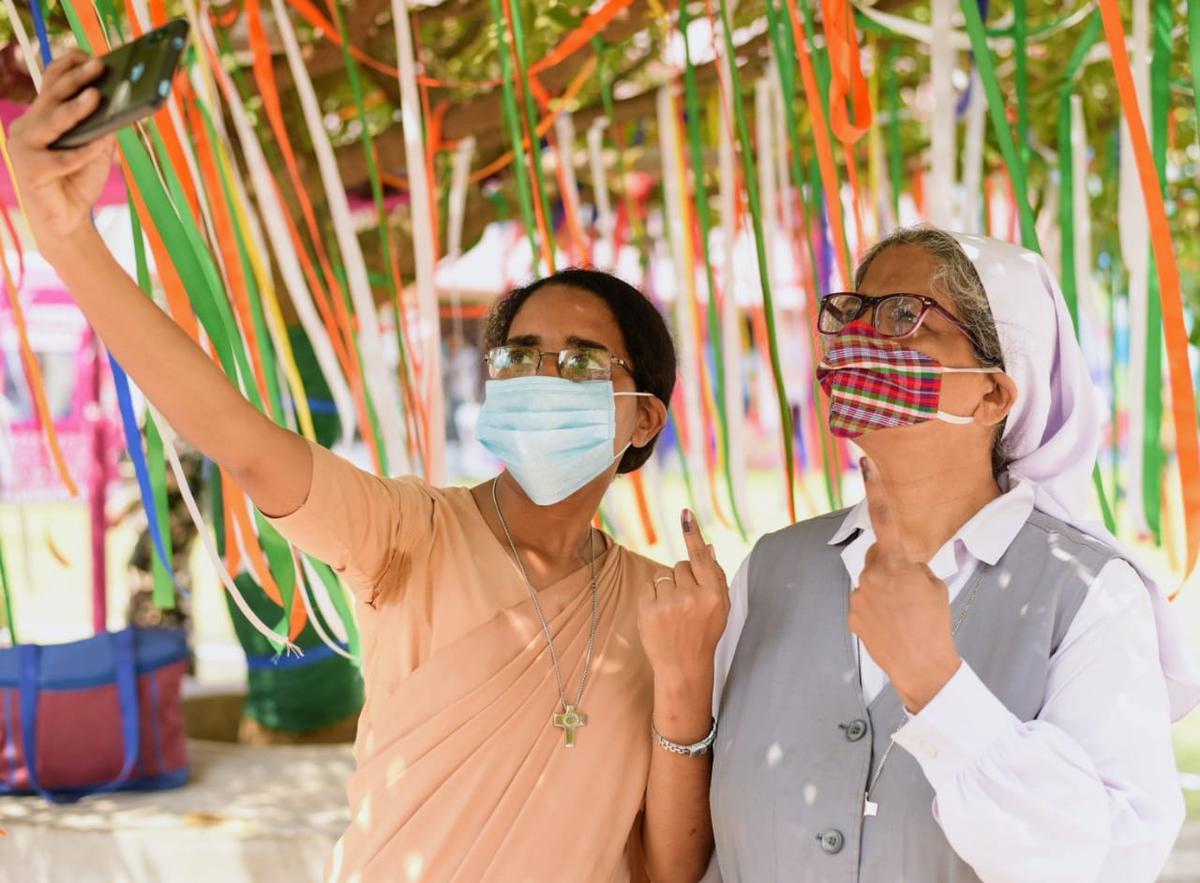 Several allegations were made by voters in Bishnupur area of South 24 Parganas and Baghnan in Howrah. Villagers said that they were threatened late on Monday against going to polling booths. They alleged that TMC supporters were behind them.

In a video shot at Bishnupur Assembly segment and shared by the Communist Party of India (Marxist) with the Election Commission, a woman is seen arguing with a man who is threatening her with her dire consequences if she went to the polling booth to cast her vote. The woman, however, is seen not yielding to pressure.

The ECI has sought a report from local authorities on the issue and the man accused of threatening the woman voter was arrested.

“The blatant misuse of Central forces continues unabated. Despite us repeatedly raising this issue, @ECISVEEP continues to be a mute spectator while men in uniform are being misused at several places to openly intimidate TMC voters & influence many to vote in favour of one party,” Ms. Banerjee said on social media, sharing a video of an incident in Uluberia in Howrah in which Central forces personnel and locals could be seen arguing. 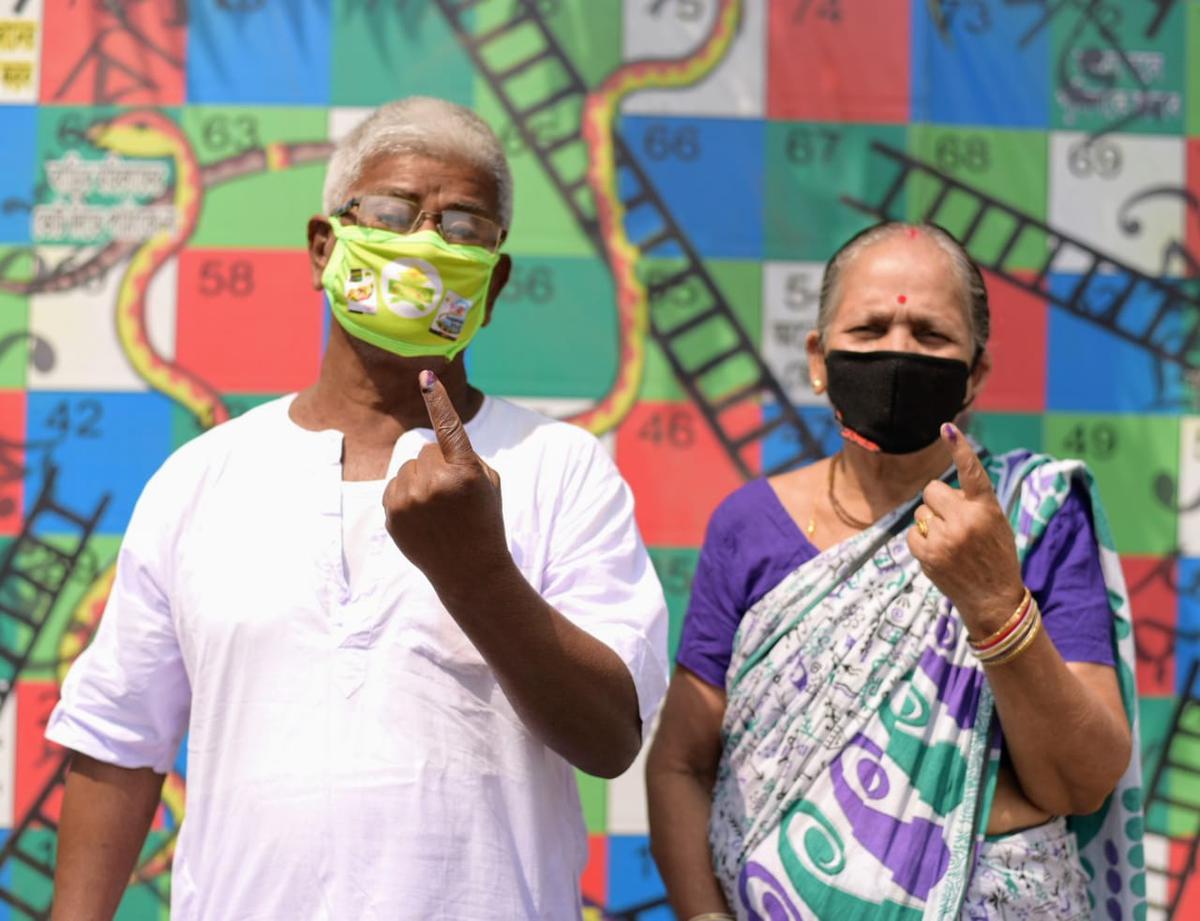 In this  episode of Talking Politics with Nistula Hebbar, we discuss the top political stories of the week: the fierce battle in Nandigram, the runaway EVM machine and the campaign gag on BJP’s Himanta Biswa Sharma.

Listen to the episode here.

“Elections are taking place in Assam, Kerala, Puducherry, Tamil Nadu and West Bengal. I request the people in these places to vote in record numbers, particularly the young voters,” the prime minister tweeted.

Mr. Modi also tweeted in Bengali, Assamese, Tamil and Malayalam, urging voters in the four states and the union territory of Puducherry to vote in large numbers and strengthen the festival of democracy. 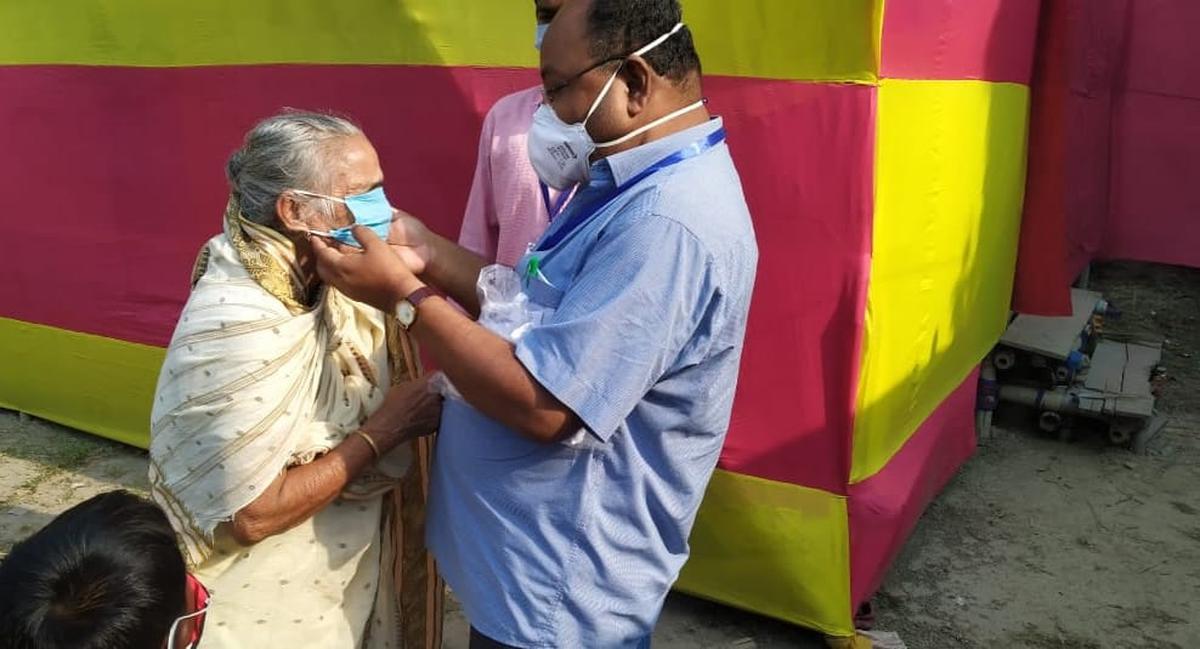 One injured in crude bomb explosion outside a polling booth in Canning Purba Assembly segment.

Diamond Harbour BJP candidate Dipak Halder alleges that voters are not being allowed to cast their votes in certain areas. Mr. Halder says he has sought intervention of the Election Commission.

Regarding the incident in the Goghat Assembly area, police said today, that the wife of a BJP supporter was allegedly killed on Monday around 11 p.m.

Madhabi Adak was injured as she tried to save her husband when a few men barged into their home and attacked him, they said. Adak’s family alleged that the Trinamool Congress was behind the incident, a charge denied by the ruling party.

Overnight violence was reported in some parts of the State.

A woman was found dead in Goghat Assembly area in Hooghly.

Villagers in Baruipur Purba Assembly segment in South 24 Parganas alleged that they have been threatened to not cast their vote.

Sector Officer of Uluberia Uttar consituency of Howrah district was suspended by the Election Commission for sleeping over at a relative’s house with reserve EVMs.

“Tapan Sarkar, sector officer of Sector 17 in AC 177 Uluberia Uttar at Howrah District went with Reserve EVM and slept at a relative’s house. This is a gross violation of ECI’s Instructions for which the Sector Officer has been suspended and charges will be framed for major punishment. The Sector Police attached to Sector Officer have also been directed to be suspended. The said EVM and VVPAT have been taken out of the stock and shall not be used in the polls,” the Election Commission said.

Villagers spotted a vehicle with an Election Commission sticker outside the house of the TMC leader in the early hours, after which they started protesting, he added.

Then, it was found that the officer of sector 17 Tapan Sarkar was visiting the TMC leader’s house with the EVMs, the official said.

The EVMs and VVPATs were seized and the officer suspended, he said. “The four machines are not being used in today’s polling. We have sought a report from the District Election Officer,” he added.

The sector officer claimed that he reached the area very late and found the polling booth closed, following that he decided to spend the night at his relative’s residence, unable to find any “safe place” to stay. 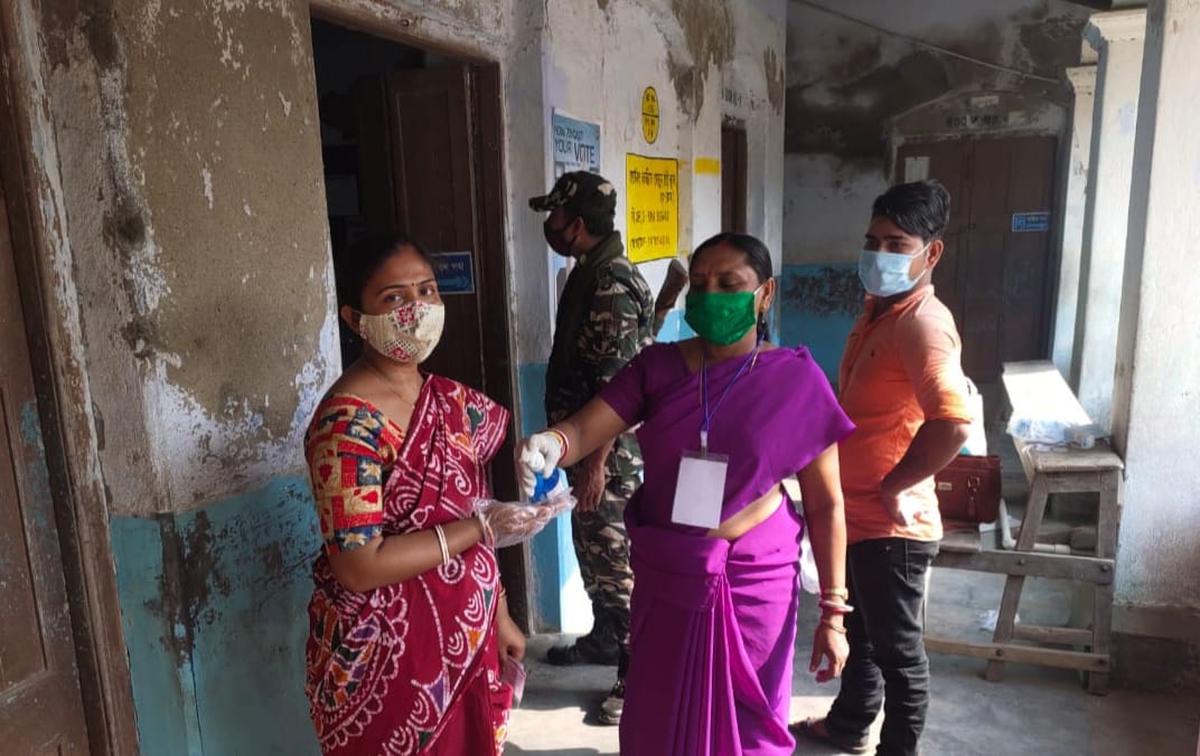 COVID-19 protocols being adhered to in a polling booth in Joynagar, in South 24 Parganas, West Bengal, on April 6, 2021.

Voting is underway with strict adherence to COVID-19 protocols in 16 seats in South 24 Parganas district (part II), seven in Howrah (part I) and eight in Hooghly (part I).

Over 78.5 lakh voters are eligible to exercise their franchise to decide the fate of 205 candidates, including BJP leader Swapan Dasgupta, state minister Ashima Patra and CPI(M) leader Kanti Ganguly.

Polling began at 7 a.m. Long queues were seen outside polling stations, where voting will continue till 6.30 p.m. 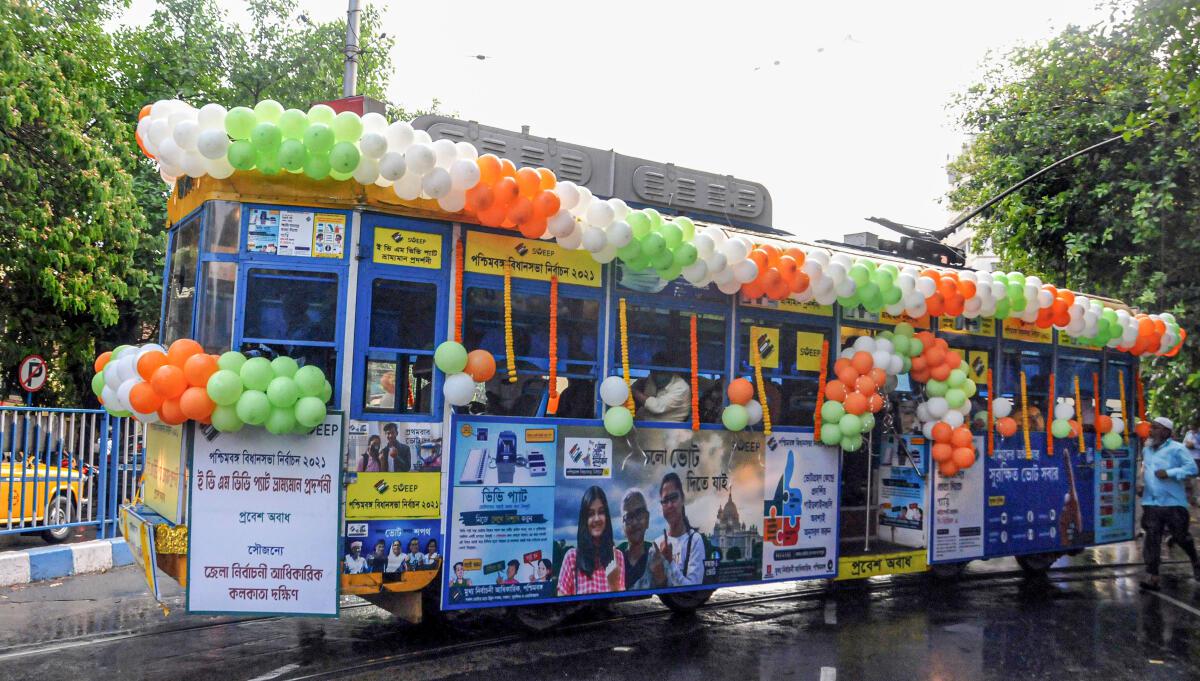 Section 144 CrPC in all 31 constituencies going to the poll

The Election Commission has described as sensitive all the 31 West Bengal assembly constituencies where voting will be held in the third phase on Tuesday and imposed prohibitory orders under Section 144 of the Cr PC in them, an official in it said.

The constituencies are spread over the districts of Howrah (Part I), Hooghly (Part I) and South 24 Parganas (Part II).

The order restricts unlawful assembly and movement, holding of public meetings, carrying of weapons, sticks, banners, placards by anybody as well as shouting slogans and using loudspeakers, he clarified.

The Election Commission of India has deployed about 618 company of Central forces in West Bengal for the third phase of polling in the State in which 31 Assembly seats are going to polls on Tuesday.

Confident of win in Bengal now, later in Delhi: Mamata

West Bengal Chief Minister Mamata Banerjee on April 5 asserted that she would win the ongoing State polls despite injury and eventually aim for power in Delhi.

Training her guns at Prime Minister Narendra Modi and Home Minister Amit Shah, Ms. Banerjee who is seeking a third term in office said that West Bengal will be ruled by its own people.

(With inputs from Shiv Sahay Singh in Kolkata and Agencies)

“Women will play a big role in the victory of BJP,” Shah demanded

7 hours ago admin
Check Me