Excess deaths data shows deaths could have been more than twice the recorded number in 2020.

If data on certified deaths in Kolkata in 2021 so far are any indication, the number of excess deaths compared to previous years was as high as 4.5 times the official recorded figure of 1,371 COVID related deaths, indicating a much higher toll from COVID-19 .

Excess deaths were estimated from data on death certification from the Kolkata Municipal Corporation accessed by The Hindu.

In April and May 2021 (till May 27) of the second wave alone, excess deaths were as high as 6.87 times the officially recorded figure of 1,198 deaths. During this period when the second wave raged in Kolkata, there were 8,234 “excess deaths” compared to 1,198 reported COVID19 deaths. These “excess deaths” were calculated as the difference between the 17,587 certified deaths in April and May 2021 and the average number of certified deaths in the same period in the pre-pandemic years between 2015-2019 (9,353). 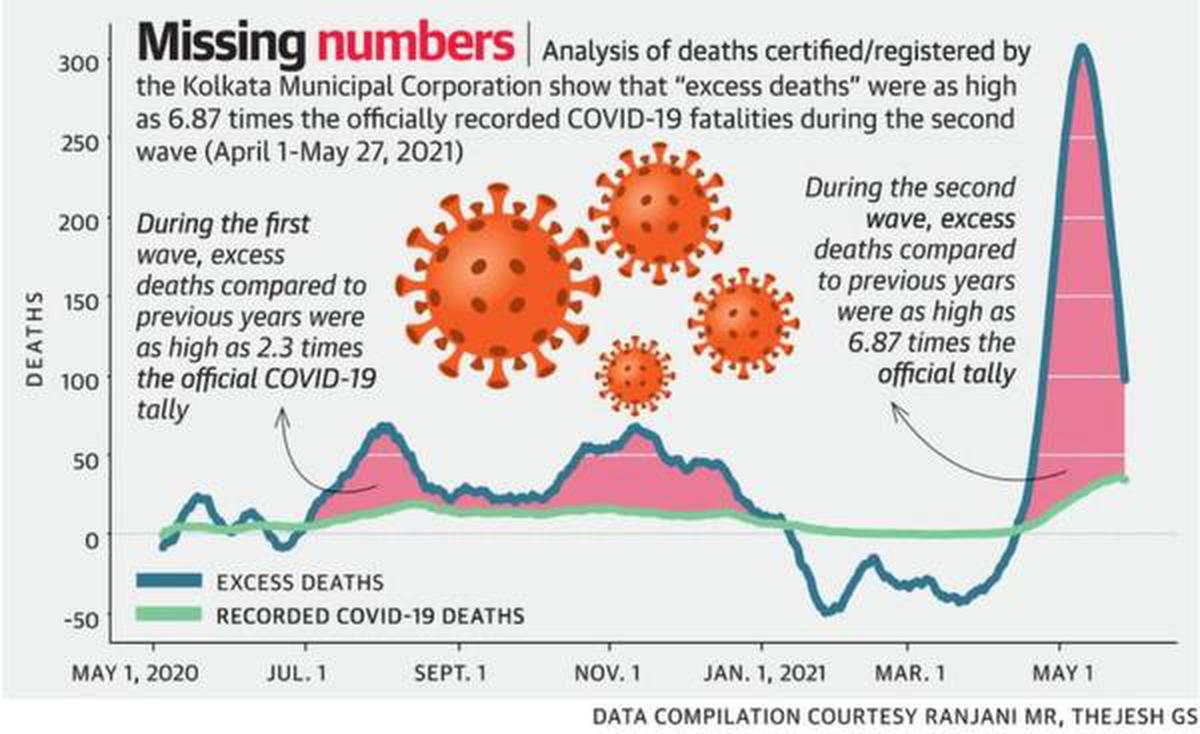 It is to be noted that the excess deaths could also include deaths due to other causes because of the inability or the lack of access to health services which were diverted to cater to the pandemic. But the bulk of excess deaths in a pandemic peak should largely represent COVID-19 related deaths.

The lower multiple of 4.5 for Jan-May 2021 as opposed to April-May 2021 was because of a low number of certified deaths in March 2021 — 4,384 compared to the pre-pandemic years’ (2015-2019) average of 5,520. This could also be because of lower certification numbers as deaths during recent months are certified with a lag — a pattern that holds true for April and May as well. Thus, 2021’s excess deaths could increase further as more updated data is available in the coming months

In 2020, the total reported deaths due to COVID-19 (from April to December) in Kolkata was 2,950. But there were 7,002 “excess” deaths — the difference between the certified deaths registered in the same months for 2020 and the average for the previous five years (2015-2019). Which suggests that COVID-19 deaths could have been undercounted by a factor of 2.37 for 2020, much less than the undercount factor in the second wave.

Also read | It’s like participating in a procession of the dead, says Kolkata crematorium official

The numbers in Kolkata for the first and second wave follow similar patterns of undercounting in other metropolitan cities like Mumbai, Chennai and States like Gujarat, which were revealed recently (see Aashish Gupta et al, The Hindu, May 25; Rukmini S, The Hindu, May 26). But the estimated undercount factor of nearly seven in Kolkata in the second wave is lower only than in Gujarat (with an undercount factor of more than 10). That Kolkata is worse affected than other metros indicates the severity of the COVID-19 wave in the last two months. This could be the result of elections conducted over eight phases in West Bengal, which registered a sharp spike in cases and deaths during the second wave.

Manas Gumta, general secretary, Association for Health Service Doctors said the organisation has been pointing out that the numbers of infections and deaths both are under-reported.

“The actual deaths will be at least three to five times more than the reported deaths. The WHO guidelines point out that deaths in case of COVID suspects should be counted as COVID deaths, which is not the case. Moreover, people living in the slums of the city are not coming in the net of testing and many deaths due to COVID are passed as routine deaths,” Dr. Gumta said. He added that under-reporting of deaths is happening across the country.

In January 2021, the WHO had estimated, based on excess deaths data in just Europe and the American continents, that actual deaths were at least 1.6 times more than the recorded ones. Excess deaths information is not released in India, which makes it difficult to assess such data, but obtaining comparisons from death certification data is one way of estimating them.

Although civil registration in West Bengal is not complete, in 2018, the Registrar General of India had estimated that about 91.8% of all deaths in West Bengal were registered. Registration is likely to be higher in urban areas and Kolkata.

Children want to cycle to school, write to Chief Minister for cycle lanes in Kolkata

Britannia 50-50 forays into the fusion snacking space with Potazos!

Micromax launches IN 2b – ‘NO HANG PHONE’

7 hours ago Desk
Check Me