42-year-old, who claims to be last practitioner of painting style, draws inspiration from contemporary issues

Bhaskar Chitrakar, 42, claims to be the last of the Kalighat painters, the community that originated in the 19th century around the Kali temple of Kalighat: “If you show me one more person in my neighbourhood engaged in the art, I will give up my profession”. He could be right, for modern Kalighat paintings shown off by popular online stores invariably bear his signature.

“Art is not everybody’s cup of tea. One needs to be interested in art in order to learn art. I love my art more than I loved my parents,” Mr. Chitrakar, who lives in a modest home in the neighbourhood of Patua Para — close to the Kalighat temple as well as to the residence of West Bengal Chief Minister Mamata Banerjee — tells The Hindu.

The central figures of a Kalighat painting are usually the Bengali babu and bibi (mostly depicted in comical situations) and the various Hindu gods and goddesses. “Traditionally, there have been political depictions too, but I try to keep away from politics because I happen to be living too close to the residence of a political figure,” says Mr. Chitrakar.

But he more than makes up for the lack of political depictions with other contemporary issues — such as COVID-19. He has made about half-a-dozen paintings related to the pandemic so far. One of them shows Lord Shiva, clad in traditional Bengali attire, thrusting his trident into the virus. Another shows Goddess Kali targeting the virus (also clad in traditional Bengali attire) with light emerging from her third eye. Yet another shows a mask-wearing babu fleeing the virus. 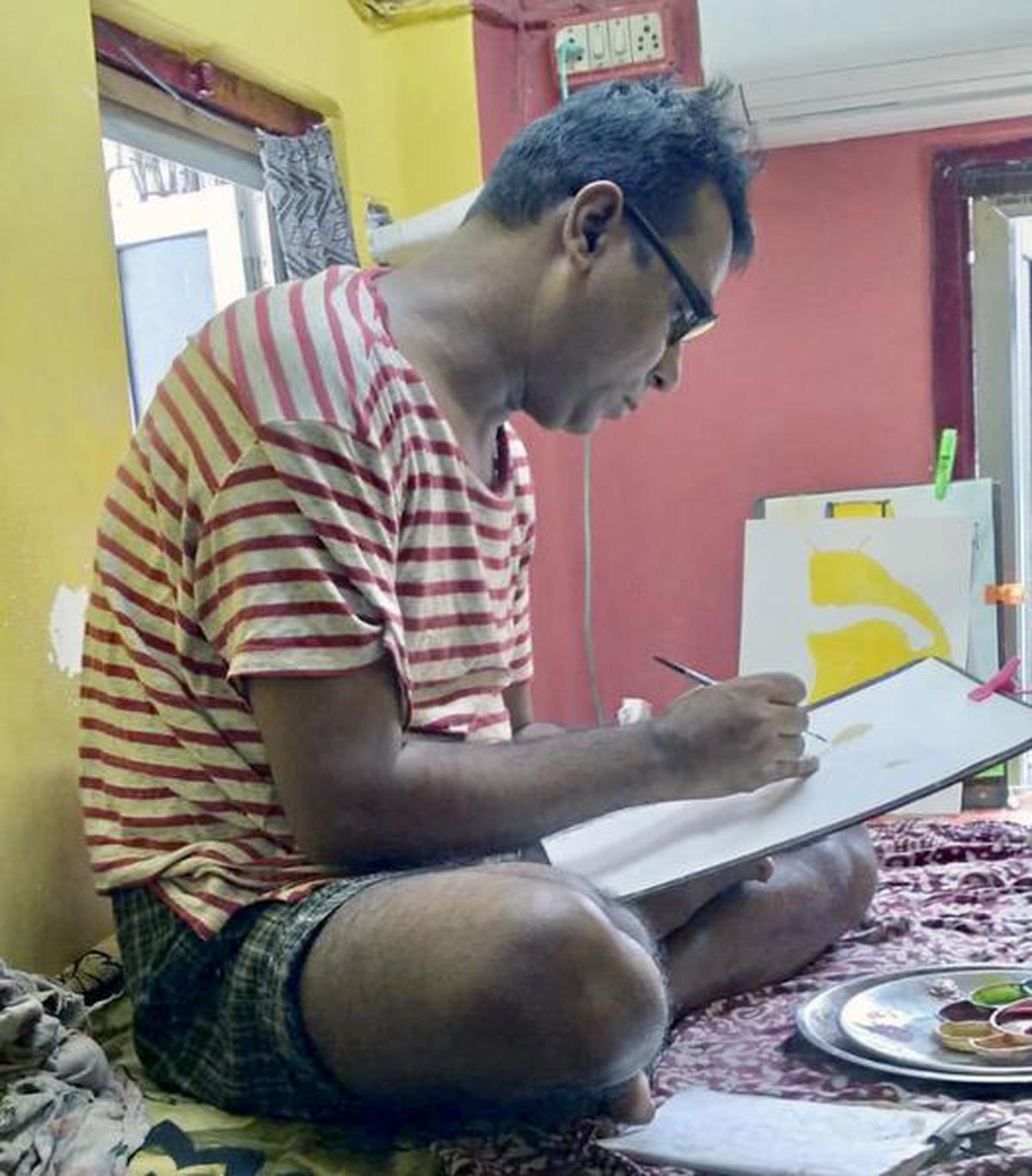 Even though the attire of his characters is always traditional, their lifestyle depicted is often modern. For example, there is a babu surrounded by Twitter birds; and there are also several depictions of the babu and bibi clicking selfies. One of his creations include his version of the Statue of Liberty, resembling a Hindu goddess, one half of her face white and the other black. This painting, created in response to the Black Lives Matter movement in America, was immediately purchased by an Indian collector living in Minneapolis.

“My art is my response to contemporary events; I guess that is what art is all about. I read the newspaper every morning and that’s where I get most of my ideas,” says Mr. Chitrakar, who studied up to Class VII and was, for some time, fascinated by idol-making before he learned Kalighat-style painting from his grandfather and father. “I am a fourth-generation artist, and I am also the last,” he says.

Mr. Chitrakar makes eight to 10 paintings a month — each takes about four days to complete — and a majority of his buyers happen to be Indians living abroad. When asked how exactly he feels when he finds his works being sold online for prices higher than he might have sold them for, he says: “I am not in this profession for money. I feel good that my work is selling because of the internet. I consider myself fortunate.”

And when asked how easy it is for him to think of ideas in these uncertain times, when there was very little news other than those related to COVID-19, Mr. Chitrakar replies: “As long as there is the newspaper, I will get my ideas. And as for COVID-19, do you think it is going to last forever? One day, everything is going to be fine.”

WayCool to Invest in SV Agri to Boost Quality and Supply of Potato Seed, Storage and Processing Pan India

Abhishek Banerjee questions on petrol diesel price in parliament Will petrol-diesel prices go down? Question in Parliament, no assurance in reply – News18 Bangla

West Bengal Weather Update: Red alert for depression in the state! How much rain in a district during the week, forecast at a glance …

Children from Sundarbans, West Bengal create a first of its kind ‘Child Parliament’ to raise concern about avoidable child deaths due to drowning

2 hours ago Desk
Check Me